Who cares? Caring with technology

A blog by Helen Kohlen

‘Who?’, put short and simple, sounds rather banal, but has turned out to be a missing question in current debates about future perspectives of care arrangements in Germany for the („more and more demented“) elderly. Who cares for whom – concretely, day to day with attention and competence since we are facing a huge care gap from the side of the care-givers: While the number of future care-receivers is doubling, the amount of potential care-givers is declining (Klie 2014; Kohlen 2010).

Over the last couple of months I have been observing a discourse in politics and academia in Germany that shows an excitement about technological advancement in home care and which is supposed to secure the elderly in their home despite certain diagnostic signs and self-perceptions of frailty. Nevertheless, as studies have revealed (see especially Alistair Niemeijer 2015, Jeannette Pols 2012) the use of technology is arranged and continuously re-arranged by somebody.

In home care, the cyclic process of integrating technology is mostly done by nurses who keep an eye on how patients handle the self-made measurements on their body and do the interpretation. In her ethnographic studies, Jeannette Pols (2012) shows how nurses and patients re-shape care when they start using telecare devices. Actual care practices employing surveillance technology do not resemble the hopes of the industry and policy makers. Surveillance technology cannot substitute care practitioners and it is not known whether there will be new challenges including pressing ethical questions facing “good” practices as we can learn from Alistair Niemeijer’s study (2015).

Last week after my lecture on Ethics, care and gender, students handed in their essays about the topic. While reading the essays over the last days I realized that the question “who is taking care of whom in the future?” was something they have not come across before. One student put it like this: “In order to prepare the future of home care we need to consider different structural formats, that is to say, what are possible arrangements; and who is supposed and willing to do the care work” (Theresa Wied).

Right now, we know: Not only the care-receivers are mostly women, but also the care-givers. In home-care as well as in the elderly homes, two out of three carers are women. Among the care-givers who do informal care – without support from professional care practitioners – are more than 70% female and less than 30% male. Professional home care is done nearly only by female nurses (90%) and the numbers are closely the same when we look at the female care givers in nursing homes (Schneekloth 2006, Kohlen 2010).

One concluding thought: to engage with current scholarly work as well as political statements by policy makers on care and technology is to enter different discussions and see how is dealt with the who- questions. “Thinking from women’s lives” (Harding 1991) in which care often occupies an important place through the life span might be a fruitful idea. 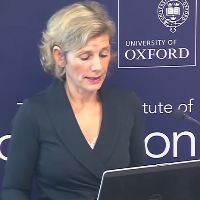 Helen Kohlen has presented the sixth talk in the Ethics of Care series at Oxford University (19-11-2014).